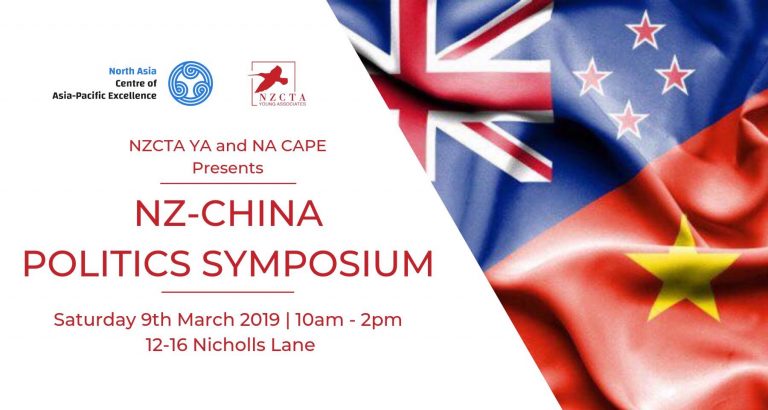 What is New Zealand's relationship with China?

After numerous sell-out events last year, the NZCTA YA in collaboration with North Asia CAPE are back and proud to present this year’s inaugural launch event about the NZ-China political scene: 'NZ China Politics Symposium 2019'.

Come along and spend the day engaging and networking with other like-minded young professionals and high profile speakers across a range of areas from those involved in academics to trade and politics with China. Be curious and ready to equip yourself with the knowledge to dispel and discern the ambiguities of the NZ-China relationship.

Topics that will be explored include:

Food and beverage will be provided. 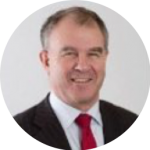 John McKinnon has for most of his career been a professional diplomat, dividing his time between New Zealand, other English-speaking countries, and China. He has been posted three times in China, twice as ambassador. His final assignment there concluded in April 2018. He speaks and reads Chinese and maintains a continuing interest in matters relating to China, now as a senior fellow of Victoria University's Centre for Strategic Studies.

John McKinnon was educated at Nelson College, Victoria University of Wellington and the London School of Economics. 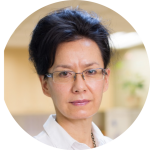 Following a career as a New Zealand diplomat in Asia, Rebecca took up the role of Director of the Confucius Institute at Victoria University in August 2017. She is passionate about building New Zealanders’ understanding of China, to ensure we are equipped to make the most of the opportunities, and manage the complexities, presented by one of New Zealand’s most important relationships. 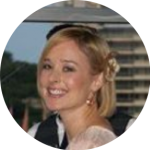 Justine is the Trade Strategy Manager at Fonterra Co-Operative Group where she has responsibility for driving Fonterra’s engagement and advocacy on strategic global trade issues. A former New Zealand diplomat, Justine has held a range of trade policy roles in the New Zealand Ministry of Foreign Affairs and Trade.

A graduate of the University of Auckland in Arts and Law, Justine has been admitted as a Barrister and Solicitor to the High Court of New Zealand, and has completed studies in international law at the University of Copenhagen in Denmark and Georgetown University in Washington DC. 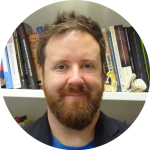 Dr Noakes is Senior Lecturer in Politics and International Relations at the University of Auckland. His research centres primarily on contemporary Chinese politics and foreign policy. He was a Visiting Research Scholar at Fudan University’s School of International Relations and Public Affairs in Shanghai, NZ-China Fellow at Peking University in 2018 and is the recipient of a Taiwan Foundation grant, which he will take up in July 2019 at National Taiwan University.

Dr Noakes is currently engaged in a pair of book projects. The first is a cross-national comparative study of China's development assistance in the Pacific Islands. The second (co-authored with Dr Chris Wilson) examines challenges to liberal democracy in the twenty-first century, including the rise and resilience of competitive authoritarian regimes, terrorist/guerrilla insurgencies, and far-right populist movements. 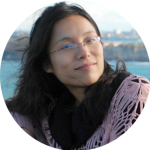 Sally graduated from the Beijing Foreign Studies University (BFSU), majoring in Burmese. Worked at China Radio International (CRI) as a Burmese anchor, dealing with news from Southeast Asia, then transferred to Australia as a resident correspondent in 2009 and 2010 and later went back to Beijing and worked at the Southeast Asian broadcasting centre for CRI. 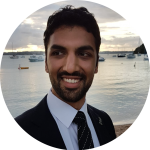 Arun Jain is a policy officer in the Ministry of Foreign Affairs and Trade’s trade negotiation division. He has been coordinator for the New Zealand-China FTA upgrade negotiations since August 2017, after several years practising as a commercial litigation lawyer in Auckland.

Arun has an LLB/BCom undergraduate degree majoring in Marketing and International Business.

And more to be announced!

We're sorry, but all tickets sales have ended because the event is expired.

Thanks to North Asia CAPE for their generous support

The North Asia Centre of Asia-Pacific Excellence (CAPE) is committed to helping New Zealand build sustainable, future-focused economic and cultural relationships with Greater China, Japan, and Korea. We have two priority areas: working with NZ businesses, particularly SMEs, seeking to internationalise in China, Japan, and Korea; and encouraging New Zealanders, especially school and tertiary students, to learn Chinese, Japanese or Korean, and to enhance their understanding of the diverse cultures of North Asia. Find out more: northasiacape.org.nz